Graham Gillmore is a Canadian painter best known for his vitriolic use of text as an art form within edgy and often controversial work. During the past 20 years he has positioned himself internationally developing a stellar reputation across Canada, the United States and in Europe.
Graham Gillmore was born February 20, 1963. Elements of his early home life helped shape his imagery providing a foundation for his future career. His accountant father provided the young artist with countless ledger sheets to draw on, saving the walls of their family home from his creative acts. Gillmore was also fascinated by anatomical illustrations found in his mother’s nursing texts. Always loving to draw, the influence of the ledger drawings and the shapes of “things internal” led to the formation of his unique personal imagery.
In 1981, Gillmore enrolled in the Emily Carr College of Art and Design and pursued a formal art education. He considers himself to be largely self-taught, but credits his friends from art school as having had the most profound affect on his work. Douglas Coupland, Angela Grossmann, Derek Root and Atilla Richard Lukacs all figured prominently in the development of his early career and remain good friends to this day.
Following graduation from art school in 1985, he and his art school colleagues found a studio on Cordova Street in Vancouver and the artistic group “Futura Bold” was born. Within a year, this creative force were included in the “Young Romantics” exhibition at the Vancouver Art Gallery and the careers of five of Canada’s most outstanding young artists were launched. Riding on the success of this initial exhibition, Gillmore moved to New York City in 1986. He currently divides his time between New York City and Winlaw, BC.
Graham Gillmore’s work can be found in numerous private, corporate and public collections in Canada, the United States and abroad, including The Ghent Museum, Belgium, the Museum of Contemporary Canadian Art, Toronto, The Vancouver Art Gallery, Vancouver, and The Museum Of Modern Art in New York City. 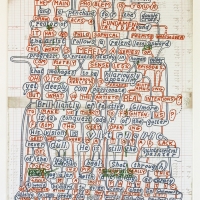