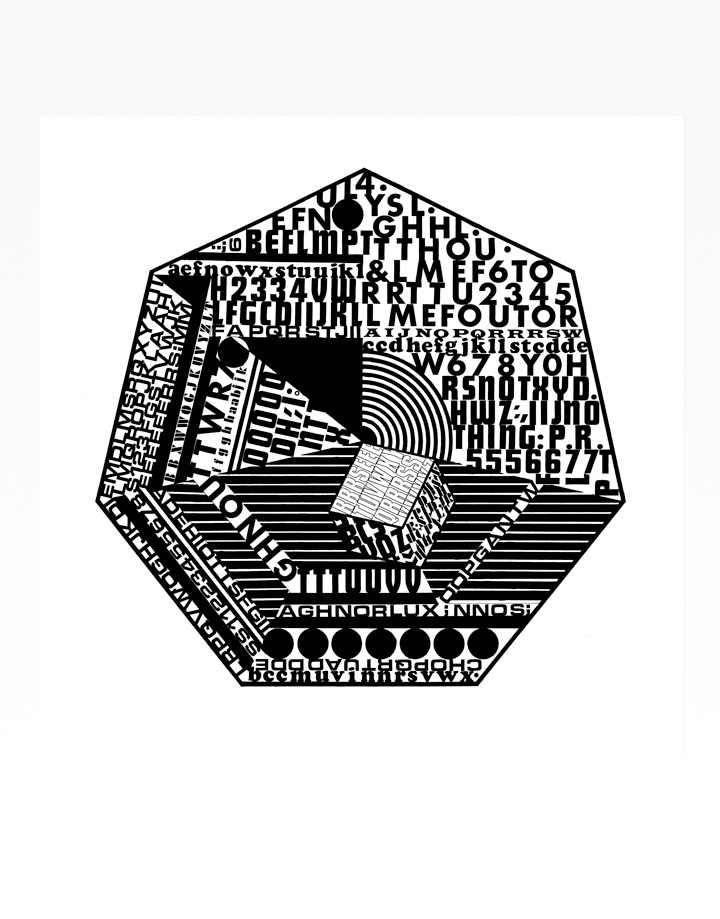 City Deluxe, a suite of ten newly produced etchings, each based on an example of Morris’ late 1960s engagement with Concrete Poetry. The original 1968 drawings of abstract black and white compositions of mainly letters and numbers arranged to emphasize the visual expressiveness of typographical language were made with a combination of ink and letter transfer techniques. Some of the designs reflect Morris’ strong interest in the legacy of Art Deco, while others show the influence of choreographer Busby Berkeley’s radial geometric patterns. Each image is rendered with an illusionistic third dimension, giving the design the semblance of an actual object. Originally intended to be part of an unbound book entitled The Problem of Nothing, the highly graphic images were recently shown for the first time in more than four decades as part of an exhibition around Morris’ work that was held at the Morris and Helen Belkin Art Gallery at the University of British Columbia. Now re-imagined as etchings in an edition of 25 published by Kardosh Projects, these classic monochromatic images are being made available to collectors and institutions for the first time since their original conception.

This very special portfolio of prints is on display at the Marion Scott Gallery from November 22, 2012 until February 2, 2013. If you’re interested in purchasing the entire portfolio in a special box for only $10,500 or individual prints for $1,500 contact Kardosh Projects at info@kardoshprojects.com.

To see some photographs of the making of these works, and of the exhibition, click here.