Lyle Wilson is a Haisla artist from Kitamaat village, which is near the town site of Kitamaat, British Columbia, Canada. The Haisla tribe is often referred to as Northern Kwakiutl, however, their historic artistic style has influences from various sources — notably Kwakiutl and Tsimshian, as well as developing distinctive qualities of their own.

Lyle was always conscious and appreciative of Haisla art, which was present in his formative years. In this regard, his first artistic influence was his uncle, Sam Robinson, who is a full-time carver. Fascinated, Lyle watched him and occasionally whittled to the best of his own abilities.

He did not pursue art as a possible profession until he attended the University of British Columbia. At this time, he committed to a career in art education, but found time spent in a studio more compelling — eventually leaving to pursue his own artistic interests at the Emily Carr College of Art and Design. He graduated with a diploma in printmaking and began to develop his individual personal style. This artistic style has its roots in graphics, but also envelopes his three-dimensional works in wood and jewellery.

He is the Artist in Residence at the University of British Columbia Museum of Anthropology (MOA). A solo exhibition of his work opened at the MOA in 1989 and travelled to eight other venues. He has produced major commissions in Vancouver for the First Nations House of Learning, the Canadian Institute for the Blind and the B.C. Sports Hall of Fame, as well as for the Canadian Consulate in Osaka, Japan. 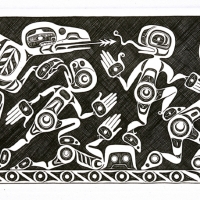